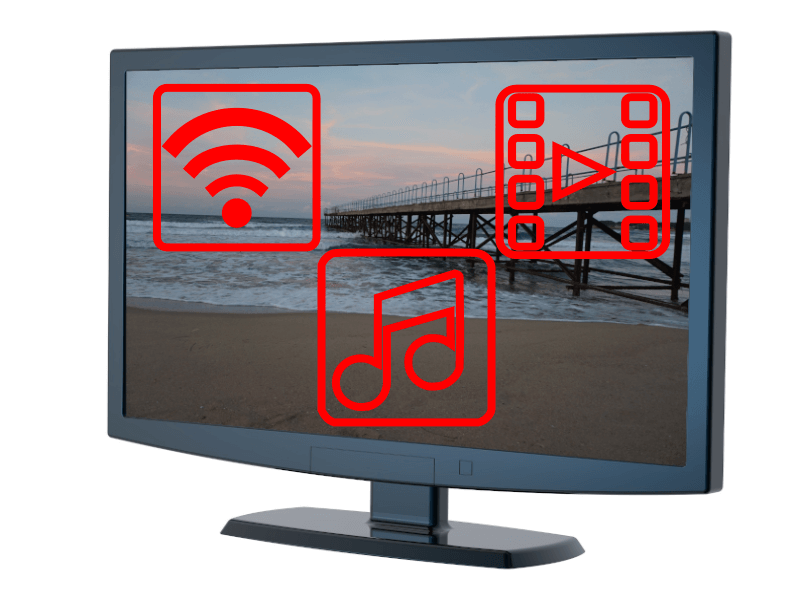 Everything about smart TVs and their features and benefits. How to set up your TV to watch movies remotely and listen music by DeviceOnline DLNA streaming.

The term “Smart TV” comes from some major companies as Samsung, LG, Sony, JVC, Philips and so on. Some IT companies use “Connected TV” or “Hybrid TV” instead of the “smart TV” term.

Nowadays these terms denote any television (or set-top box) that provide ability for:

Some media formats are not well supported by Smart TVs. You can use video transcoding to stream such video to your device.

Smart TVs are much more sophisticated and are seen as a computer system with advanced television functionality. These systems work with a complete operating system and allow the development of software updates and add-on apps for them. Third-party application developers can use public Software Development Kit (SDK) to create new Smart TV applications. This allow end users to install them on their Smart TV device.

This feature of Smart TV is one of the most popular, as it allows you to use the TV as a remote screen to watch your favorite media.

Why should I have a Smart TV?

The Smart TV devices provide a huge set of functionalities. One of the most popular are the DLNA services. Using DLNA services, users are able to cast content from their devices such as Smart phones, laptop, personal computers, tablets, etc directly to their television set using Wi-Fi connection.

This means that you are able to share media content to your TV without the need of USB sticks, HDMI cables or other hardware.

Obviously there are a lot of benefits to posses a Smart TV device and recently on the market these kind of televisions are more than the traditional ones. For example some of the most generic functionalities are:

This type of device provides an important service called Internet Protocol Television (IPTV). This allows them to receive multimedia content directly through the device’s internet connection without the need for a rooftop antenna, satellite dish or the like.

А general feature of these devices is that they allow installation of 3-rd party apps. Therefore, they can provide additional functionality such as: games, multimedia streaming and web browsing.

Along with improved software features, most Smart TV manufacturers put significant efforts to improve the functionality of the remote control. These devices are pretty close to smart phones, but in contrast the users are not able to control them using screen touches since normally they are several meters away. So most of these modern devices come with improved control system which is close to wireless mouse control. Some devices even allow you to attach a wireless mouse and use it to control much of the TV’s functionality.

One of the best enhanced remote controls is that of the LG smart tv – Magic Remote. It has pretty close user experience to those of Nintendo Wii. This remote allows you to point over the screen items and select them with a click.

How to connect my Smart TV to the network and use DLNA?

Every modern Smart TV has an Ethernet cable connector on the back for a network connection. The process is very similar to connecting a PC to a home network.

Some TV devices has an additional embedded Wi-Fi adapter for wireless connection. Most devices support an external WiFi adapter in case they don’t have an internal one.

Although Wi-Fi connection seems more convenient, most technicians recommend using wired connection since it is more secure and stable.

As mentioned, connecting your TV to your home network adds significant convenience to your home theater system.

Cast movies to your home TV

Once the TV network is configured, the DLNA functionality of your TV is almost ready. Finally the user simply needs to download the device online app to their computer and use it to manage and stream media to the TV. In order to find more detailed information on How to use DeviceOnline apps read here.

1 thought on “What do we need to know about SMART TVs?”

We use cookies on our website to give you the most relevant experience by remembering your preferences and repeat visits. By clicking “Accept All”, you consent to the use of ALL the cookies. However, you may visit "Cookie Settings" to provide a controlled consent.
Cookie SettingsAccept All
Manage consent

This website uses cookies to improve your experience while you navigate through the website. Out of these, the cookies that are categorized as necessary are stored on your browser as they are essential for the working of basic functionalities of the website. We also use third-party cookies that help us analyze and understand how you use this website. These cookies will be stored in your browser only with your consent. You also have the option to opt-out of these cookies. But opting out of some of these cookies may affect your browsing experience.
Necessary Always Enabled
Necessary cookies are absolutely essential for the website to function properly. These cookies ensure basic functionalities and security features of the website, anonymously.
Functional
Functional cookies help to perform certain functionalities like sharing the content of the website on social media platforms, collect feedbacks, and other third-party features.
Performance
Performance cookies are used to understand and analyze the key performance indexes of the website which helps in delivering a better user experience for the visitors.
Analytics
Analytical cookies are used to understand how visitors interact with the website. These cookies help provide information on metrics the number of visitors, bounce rate, traffic source, etc.
Advertisement
Advertisement cookies are used to provide visitors with relevant ads and marketing campaigns. These cookies track visitors across websites and collect information to provide customized ads.
Others
Other uncategorized cookies are those that are being analyzed and have not been classified into a category as yet.
SAVE & ACCEPT